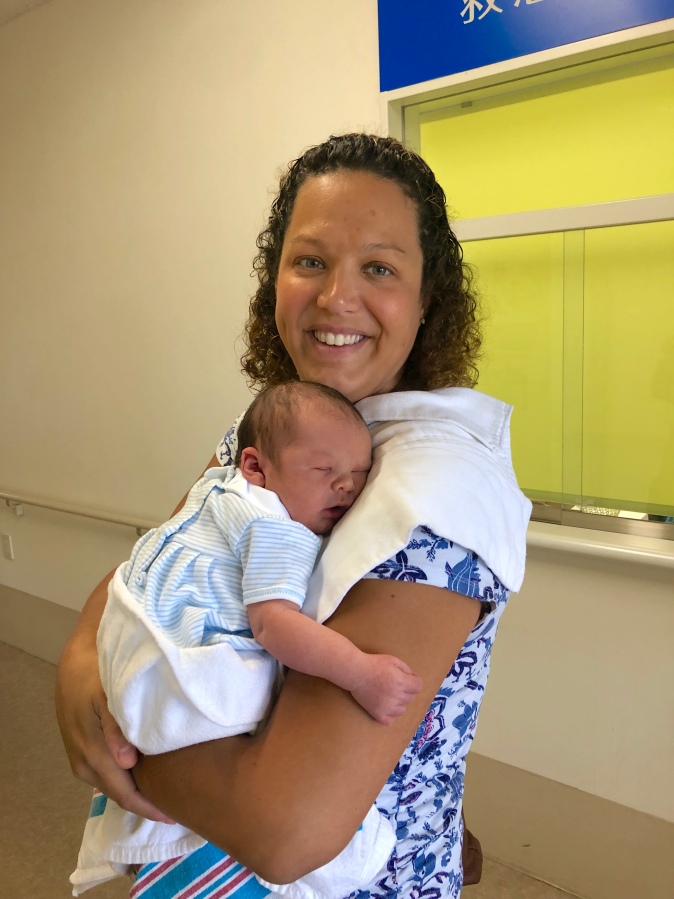 Before beginning the rest of the story about my Japanese Birth experience, it is important to note that at ICC they have many, many rules that they did not have at the hospitals I delivered at in Colorado and Germany. One rule was that they do not allow children to visit the newborn in the labor, delivery, and maternity wards. Not only was this very different from our previous experiences, but it was even more strange because the pediatric unit was just on the other side of the same floor and hallway. Thankfully this was a rule we knew about from the beginning, and we asked questions about our girls and Nana being able to come meet baby Flynn while he and I were still in the hospital. We found out that the girls were allowed to be in the room during labor and delivery and up to an hour after his birth. We did not want the girls to be in the room for labor and delivery, so we had a plan to have Nana and the girls come to the hospital within the allotted time frame. Keep reading to see how this played out in reality versus our expectations.

After Flynn’s birth and having the opportunity to breastfeed him, the midwives took him to the nursery to take his vitals and have the doctor check him. Flynn spent most of the immediate hour after his birth in the nursery so even if the girls and Nana had been at the hospital when he was born, they would not have been able to hold him and spend much time with him. Luckily for us, one of the midwives extended the time an extra hour so Jake could pick up the girls and Nana, and the could return to the hospital to meet Flynn. While they got a very limited amount of time to see him and hold him, we were happy that they did not have to wait until we brought him home to meet their baby brother.

Also after Flynn’s birth, I was given a traditional gift from the hospital staff. I received the Kotobuki Bako, the umbilical cord box. It is one of the most common birth rituals practiced in Japan in which the umbilical cord is saved in a wooden box. The midwife handed me the open box that included a piece of gauze on which a part of Flynn’s umbilical cord was placed. I was told to wait to put the lid on the box until after the umbilical cord had completely dried. Kotobuki means celebration or longevity and Bako means box. It is thought that by preserving the umbilical cord this way there will be a positive relationship between the child and mother.

Typically after this hour or two following Flynn’s birth, I would have moved to a maternity room. At ICC, most mothers share a room with 3 other mothers. The babies do not stay in the shared room, but in the nursery. For nursing/feeding the babies, the mothers go to the nursery lactation room on a set schedule. (I’ll explain this in more detail in just a bit.)

I did not want to share a room, and I had asked for a private room, so that I could have some privacy and so that Flynn could stay in the room with me. Fortunately, they had a private room that would be available to me, but not right away. Therefore, they had me stay in the labor and delivery room until they were able to move me into the private room. And since I was not in the private room yet, Flynn stayed in the nursery. This also meant that I was granted the privilege of experiencing the Japanese nursery lactation room. As mentioned earlier, there was a set time that all mothers would head to the room to breastfeed or formula feed their baby.

And so here is how that experience went down…once all the mothers came into the lactation room, the babies were brought to their mothers. The mother would change the baby’s diaper, weigh the baby on a scale, and mark the baby’s weight on a tracking sheet. Then, the mother would feed the baby. While I am not modest about breastfeeding, it was definitely a unique experience sitting in a room full of about 8 women all breastfeeding our babies. The room was set up so that the seating was against the walls and you faced inward. The babies’ bassinets were placed in the center of the room. I was also thrown off by this experience because it was not mentioned at any point during our hospital tour or during my prenatal visits. Plus, I was the only American and English speaker in the room. Once the mother finished feeding the baby, she weighed the baby again, and noted the baby’s weight on the tracker. I was able to experience this twice before my private room was made available to me.

When it was time for me to move into the private room, a midwife came into the labor and delivery room, where I was waiting, to explain the various rules such as the limited times for visitation and what I should expect during the rest of my stay at ICC. In order to receive this information, I called my translator on the phone to help with communication. Visitation was limited to family members ONLY and during specific times. However, I was not eating the Japanese hospital food, and I asked if Jake could bring me food daily at various times that were not during the scheduled visitation hours. The staff kindly made this accommodation for us. Shortly after signing off that I understood the many rules in place, Flynn joined me in our private room where we would spend three and a half days.

Flynn and I settled into our new room, while Jake had taken Nana and the girls back to our house. Later that evening, he dropped Nana off at the hospital so she could enjoy time with Flynn. It was a good thing she was able to be there because at one point in the evening, I stood up and realized I was having a lot of bloody discharge that I had not experienced after my previous births. I immediately buzzed the midwife and let her know. They called the doctor to examine me and sure enough I was hemorrhaging because my uterus was not contracting correctly. Thankfully this was an easy fix and they hooked me up to an IV with medication that would cause my uterus to contract and stop the excessive bleeding. During this time, Nana was able to watch and love on Flynn while I rested. Eventually Nana went home for the night.

That night Flynn woke up often to feed. I had a hard time falling asleep because the midwife asked me to keep an overhead light on….I never understood why she wanted me to do this. And once I was asleep it was hard to stay asleep because they had an oxygen and heart rate monitor on his foot. It beeped constantly!

Our daily routine during our stay was nothing exciting. Jake would bring me breakfast in the morning and spend time with Flynn. I would shower daily when he was taken to the nursery for vitals checks in the morning. Jake would usually bring me lunch and in the evening, he would drop his mom off at the hospital, with my dinner.

Eventually after 6 days of being in the hospital we were discharged and went home.

View all posts by threetulipsandatexan